A Picture of Helen – Wife of Poet Edward Thomas

Helen Berenice Noble married Edward Thomas on 20 June 1899 whilst he was still an undergraduate at Oxford and only 21.  They had been introduced by her father, the critic James Ashcroft Noble, who encouraged Edward to publish his essays based on long country walks and to work on his first book, The Woodland Life (1896).

James Noble died suddenly in 1896 and when Edward married Helen she was pregnant with their son, Merfyn, who was born in January 1900.  Later that same year Edward graduated with a second-class degree in History; a disappointment to his father, as was his decision to become a writer (Philip Henry Thomas was staff clerk for light railways and tramways at the Board of Trade and prominent in local Liberal politics).  Edward appeared to be reacting against the worldly values of his father and their relationship continued to deteriorate.

In her memoirs As it was (1926) Helen describes Edward as tall and fair ‘his nose was long and straight, his mouth very sensitive… The chin was strong.  The eyes were grey and dreamy and meditative…  His hands were large and powerful and he could anything with them’. (1)

Helen and Edward extended their family with two further children, both girls, Bronwen and Myfanwy (affectionately known as Baba).  Edward was to suffer from acute depression throughout his life and often felt trapped in his attempts to support his wife and children with the constant turnover of work as biographer and literary critic.  Many episodes were severe and several biographers reflect on how much this affected his family life and the strain placed on his marriage to the ‘long suffering Helen’.

Perhaps a couple of lines from Thomas’ own poem to his wife And you, Helen tells us more:  ‘If I could choose / Freely in that great treasure-house /  Anything from any shelf, / I would give you back yourself……..  And myself, too, if I could find / Where it lay hidden and it proved kind’. (2)

Yet Helen’s devotion was unshakeable and in her sequel World without End (1931) she recounted their family Christmas 1916 and Edward’s final leave at Steep.  How visitors came and went, the children helped him chop branches into logs and took turns to polish his uniform buttons, buckles and badges.  They talked of old times, sang songs around the fire and he studied maps with Merfyn whilst the many things unsaid hung in the air.  On the last night Helen recalls “He reads me some of the poems he has written that I have not heard – the last one of all called ‘Out in the Dark.'” (3)

Out in the dark

Out in the dark over the snow
The fallow fawns invisible go
With the fallow doe;
And the winds blow
Fast as the stars are slow.

Stealthily the dark haunts round
And, when the lamp goes, without sound
At a swifter bound
Than the swiftest hound,
Arrives, and all else is drowned;

And star and I and wind and deer,
Are in the dark together, – near,
Yet far, – and fear
Drums on my ear
In that sage company drear.

How weak and little is the light,
All the universe of sight,
Love and delight,
Before the might,
If you love it not, of night. (4)

In the morning Edward departed on foot to the station, taking Bronwen with him for the journey to his parent’s home in London, both disappearing into the thick mist and snow.  A couple of weeks later he made the move from Lydd to Codford on the Salisbury Plain.  Just two days before his embarkation to France Edward discovered that a distressed Helen, unable to cope, had placed Myfanwy with his friends the Ransome’s at Hatch.  Hatch was just 13 miles from Codford Camp and he immediately swopped his new boots (that had chaffed his ankles raw) with a colleagues and sets off in the freezing cold of January to see young Baba for the last time. (5) 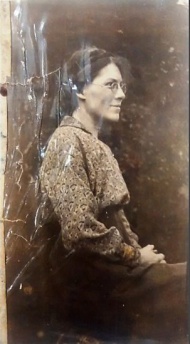 Edward Thomas was killed in action on Easter Sunday, 9 April 1917, directing fire at a forward observation post in the 1st hour of the Battle of Arras. The creased photograph of Helen was found in the pocket of his uniform. (6)  According to myth he fell without a wound to his body, a shell blast stopping his heart and his pocket watch.

In a fairly recent biography by Jean Moorcroft, Edward Thomas: From Adlestrop to Arras, the author believes this myth was perpetuated by his widow, Helen, and reinforced by early biographers.  After a visit from his commanding officer, Franklin Lushington, Helen wrote to a friend: ‘He told me there was no wound and his beloved body was not injured.’

This could have been a final act of kindness by his superior, but Moorcroft has unearthed a letter in a US archive from Lushington to Edward’s biographer, John Moore, in 1936 revealing that he was ‘shot clean through the chest’. (7) It appears that Moore chose not to use Lushington’s account perhaps in deference to Helen, who suffered a breakdown over her loss.  Helen Thomas lived for fifty years following Edward’s death; she never remarried.

Header image – Jacky Dillon – composite Edward Thomas’ photo of his wife Helen found in his uniform pocket following his death at the Battle of Arras 1917 and ‘Bataille d’Arras’ Map http://www.archivepasdecalais.fr